Teddy was due on september 15th, but by the time the first of september rolled around, I was more than ready for him to come, as you could probably tell in that blog post. I was sure that I would get more sleep with a baby outside of me than I ever would with him inside of me! So for the next week, I did everything I could to get this baby out of me, took long walks, ate spicy food, pineapple, the works. Wednesday I went into the doctor and got my membranes stripped (ouch)- and thought for sure that would do it... nothing. Thursday I went for a 2 mile walk (well more like a waddle) around logan... nothing but a few contractions. Friday, I gave up. I did what my body really wanted me to do, and just rested all day, and that night we went to Hyrum to do laundry at Jason's parent's house... the whole time I was joking around that as soon as we left Logan my water would break, and Jase would have to deliver him in the car.

So we get to Hyrum, get our clothes in the washer, and I'm eating some delicious dinner on their couch while Jason was doing homework. After I finished, around 10:00 pm, I got up to put the dish in the sink when... BAM. My water broke. I didn't know what to do! I just told Jase that my water broke, and then ran to the bathroom. And locked the door. haha. I don't know why I locked the door. Anyway, a little confused, Jase followed me to the bathroom, and asked a million times through the door if I was sure that was what happened. I started listing off what I wanted him to do: get my phone so I could call my mom, get me a towel to sit on in the car ect.

Soon we were on our way to Logan. I wasn't in any pain other than the normal pregnancy pain I had felt before. We were mostly giddy and talked the whole drive to Logan how this wasn't how we pictured it going down! We drove to our apartment so I could change my clothes, and we took our time packing up the rest of our bags. It was so surreal, it felt like everything was going in slow motion. We got in the car, and held hands the entire way to the hospital. I remember Jason saying "this isn't anything like the movies." I wasn't screaming, crying, or cursing- just calm, relaxed, and only having some very mild contractions. We got behind this extremely slow car, and we didn't even mind! We walked into the hospital around 11:45 pm, holding hands and gabbing about how excited we were! We joked with the nurses who were checking us in, and she and Jase just kept asking if I was SURE that my water broke, because I was acting way too calm. I was starting to doubt it myself! If I hadn't have left Jason's parent's house with wet pants, I would have doubted it myself.

I was being so calm about the whole thing, that they tested me to see if I my water really had broken. It had. That's when everything started to speed up. I was dialated to a 4, 75% effaced, and baby boy was at 0 station. Jason's dad and brother and sister were ironically at the hospital at the same time we were there to give a girl a blessing, so they were our first visitors in the hospital! My mom and brother were next, and got there around 1:30 am.

By the time my mom and brother were getting there, my contractions were strong, but not too painful, but I still hadn't progressed further than I had been an hour earlier. I was planning on getting an epidural, and let the nurses know that as soon as we were settled in our room. The nurses came in when my mom and brother were still there, and told me that even though I wasn't in pain, the anesthesiologist was in the room next door giving the girl there an epidural, and if I wanted he could just come give me one afterwards. I decided to do it- and I'm glad- it gave Jase and I the chance to get a little bit of sleep before the actual pushing part of labor came. So the anesthesiologist came in around 2:00 and gave me the little run down of the risks and whatnot, and mentioned that one of the risks is nerve damage. Jase and I were in a physiological psychology class, and we had just learned about nerve damage, so it made the two of us really nervous- I decided being pain free was worth the risk, and Jase didn't say anything, but he started turning really pale. He was a dear and let me hold onto him while the guy did his thing, but right afterwards, he had to sit down and drink some juice. ;)

Around 3:00, they told us to try and get some sleep while the epidural and pitocin did it's magic, so we sent my mom and brother to our apartment to do the same, promising to call them as soon as it was time. We had a scary moment when the epidural started to numb the top half of me instead of the bottom half of me, and they had to give me oxygen to breath, but we eventually got to sleep. The next thing I knew, we were being woke up by a nurse who was coming to check on me at 5:30. She checked, and I was ready to start the rest and descend, which lasts for about an hour. I slept through that too. At about 6:30, the nurses said it was time to push, which I did for about 5 minutes, and they realized that this little guy was more ready to come out than we thought- and the doctor wasn't there yet! They had me stop pushing and try and hold him in for about 10 minutes while we waited for the doctor... I think that was the hardest part! Finally our doctor got there, and 4 pushes later, Teddy was born!

It was the most incredible moment of my life. They laid our baby boy on my chest, and we got to look at our little angel for the first time. I can't even explain the feeling you get when you get to hold your baby for the first time. I remember him opening his little squinty eyes and looking up at me, and instantly my heart melted. After they had cleaned him up and wrapped him up in a blanket, they handed him back to me, and they all left the room. Jase and I looked at eachother, and our tired eyes tried to cry, but we must have been too tired to have any tears come out. It was such a special moment. I felt so blessed, and so close to heaven. We finally called our parents and let them know that everything had gone so fast, and to come over stat, because it he was here! Jase and I had narrowed it down to three names, and decided on Theodore Clint Jensen. I love it.

Then it was on to recovery! The next few days were a blur. I really only remember being visited by family and friends, being amazed by the hospital food, and learning to breast-feed (ouch.). 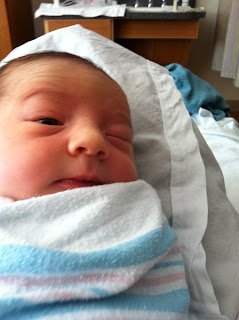 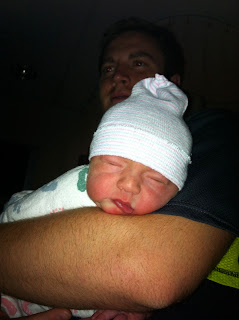 Leaving the hospital was scary/weird. I didn't know how it was going to be without all of the help and advice from the awesome nurses. We were excited to get home with our new little bundle, though! 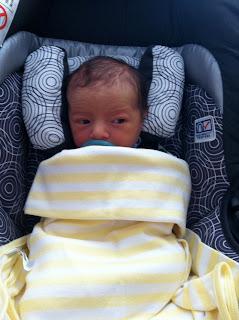 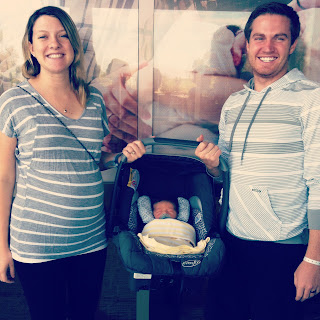 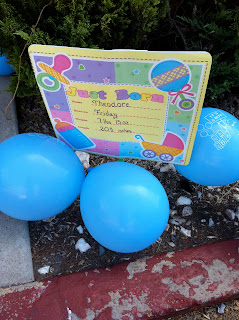 I loved spending time with my little family, and am so grateful for the help I got from my mom and Jason's mom the weeks after. 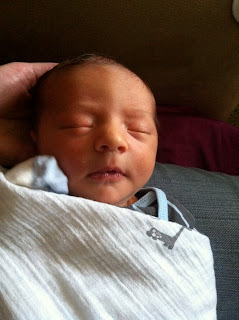