So a week or so ago, my funny brother-in-law, Nate, was telling me a story about a guy at his work who got written up for picking his nose. (Nathan is a chef up at the Sundance resort.) The way they knew he picked his nose was that he got a jalopeneo (I don't know how to spell that) burn up his nose after he had just chopped some of the little peppers up...

Fast forward to yesterday...
I decided to make salsa. Yes. Salsa. You know where this is going.
I realized that I had all of the ingredients for it (thanks to my awesome mother-in-law and her luscious garden),  except for jalopeneos... actually I remembered that I needed those after thinking about Nate's funny story.

So I go to the grocery store. Grabbed a little jalopeneo and jot back home. The whole time I am thinking to myself that I really should remember to not touch my face after I chop up the little, harmless looking pepper.

True to my form, I did end up sub-counciously scratching the inside of my nose. It was very gradual, but it surely did start burning. I tried to wash it off, but it got worse, and spread to my upper lip. (Jason was a very good husband, and for the most part kept his cool, and didn't laugh)

Google is actually what came to the rescue! (I was a little too embarrassed to call Nate... haha!) I googled what to do when you have a jalopeneo burn up your nose... and they said to snort milk (Which I thought was a little un-ladylike. Instead I just soaked a cotton ball and shoved it up my nose. Pure heaven I tell you! But it didn't quite take care of the mustache area, so I ran back to macey's, and grabbed some yogurt and applied it to the burn right there in the parking lot! (This is where Jase lost his cool and started laughing his head off. I didn't mind though, I was so happy for the pain to stop) 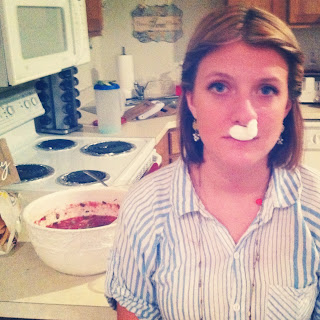 The pictures are actually hilarious! ( I wasn't in the mood to smile) Jase took them during his little laughing spell... gotta say, though, the salsa was worth the pain. 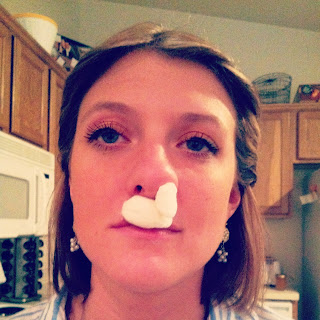 P.S. Today, I am grateful for Sarah.

Gaylene said…
Ashley, you are so awesome! I love ya and I really get excited to see what you have written, thanks always for making me smile! Have an amazing day! Loves from Boise :-D
October 18, 2011 at 2:42 PM